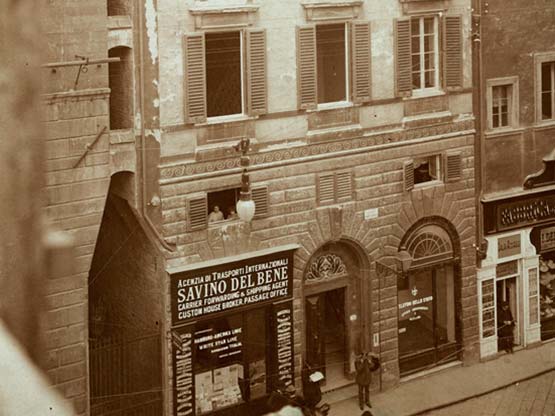 We always challenge the concepts of time and space

Savino Del Bene, which bears the name of its founder, was created in 1899 by the Del Bene family. From family beginnings in the business of maritime transport, Savino Del Bene began to operate independently after World War II assuming a prominent role in trade between Italy and North America.

In 1979, under the leadership of General Director Paolo Nocentini, Savino Del Bene was restructured to increase our international presence, opening offices in the United States, Canada, Europe, Hong Kong, and Australia. In the decades since Mr. Nocentini assumed the presidency, the company continued its global expansion opening offices in South East Asia, South Africa and Latin America, thereby positioning itself broadly across the five continents.

Under the leadership of its Presidency and through the organization in Vertical Markets, the investments in Information Technology, the high specialisation of staff and the movement towards excellence in logistics have ensured that Savino Del Bene ranks today among the largest operators in the industry of freight forwarding, growing from a small family business to a multinational industry leader.

In 1997, Savino Del Bene obtained ISO 9001 quality certification for successfully implementing international standards in quality control and customer satisfaction. Savino Del Bene has grown globally and constantly investing in structuring the company, reaching a turnover of more than 1.61 billions Euro in 2019, and catching the opportunities given by an international clientele and the global movement of goods.

“Crises are proof of the involved forces; those who are strong overcome them and are stronger at the expense of those who fail”

For more information on the cookies used by the site, you can consult the complete cookie policy. You can, at any time, manage your preferences below using the button in the footer.

This website uses cookies so that we can provide you with the best user experience possible. Cookie information is stored in your browser and performs functions such as recognising you when you return to our website and helping our team to understand which sections of the website you find most interesting and useful.

If you disable this cookie, we will not be able to save your preferences. This means that every time you visit this website you will have to enable or disable cookies again.

This website uses Google Analytics to collect anonymous information such as the number of visitors to the site, and the most popular pages.